what is a community cat?

A Community Cat is an un-owned, un-socialized cat who lives his/her life outdoors. That is different than a stray cat who has been socialized around humans, but was abandoned or lost outdoors. While stray cats can be brought to a shelter and re-homed with another human family, community cats can NEVER be placed in a home or brought to shelter. Community cats are essentially wild animals, who live outside in our communities around the world; they are some of the first cats to be killed in shelters as they are not adoptable.

You've probably heard the term "feral cats." Feral is often used to describe outdoor cats, however, "feral" is actually a behavior. While community cats may display feral behavior (fear and avoidance of humans), other may actually be more trusting of humans; using the more encompassing term of "community cat" is preferred. 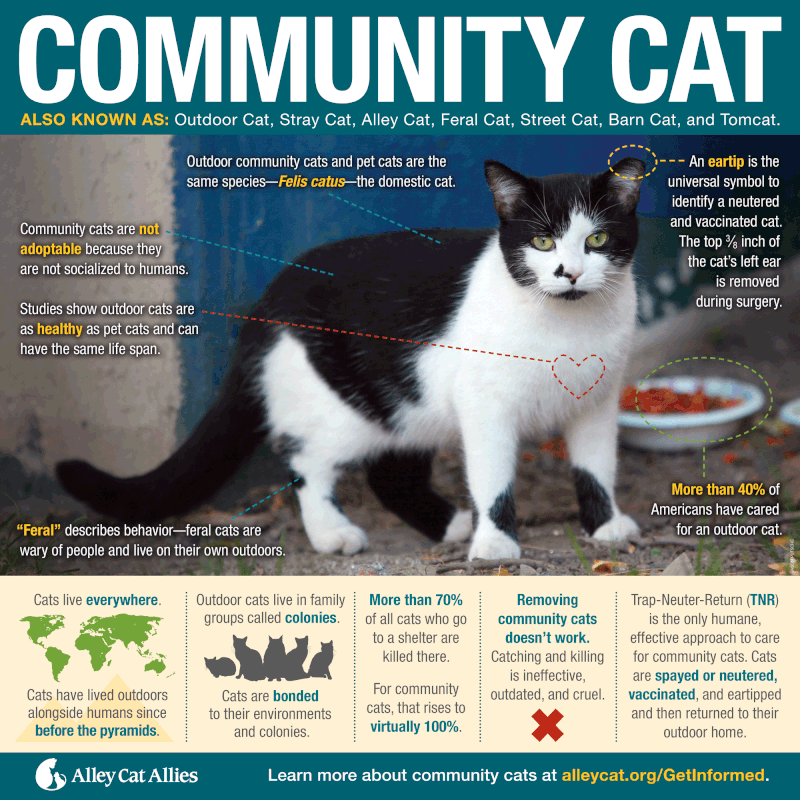 what is trap-neuter-return, aka tnr?

I found a litter of kittens outside, what do I do?

It’s natural to want to scoop them up and try to care for them yourself or take them to a shelter. But both of those options may actually place them in more danger. To give newborn kittens the best chance of survival, follow these steps:

why not just catch and kill all the cats?

Many people feel that it's "unfair" or "cruel" to keep these cats outside, but remember - they were born outside with little to no human contact. Their home is outside! You would not try to bring in a wild raccoon to make it a pet in your home, would you? Aside from moral issues of just killing cats, studies have shown that just removing a colony will result in new cats taking over - you are basically creating a vacuum effect; more and more new cats will come to fill the vacuum left by removing the original cats of the colony. The TNR method has shown over and over again, its the only effective way to stabilize and eventually reduce a colony in a community.

can the cats be released somewhere else?

The short answer is "no." These cats are suited and adapted to the community the live in now. They know the places to get food, water, shelter; they know the members of their colony and have close connections with some of their colony members. They know their home and moving them to a new location greatly decreases their chances of surviving.

benefits to the community

Many of the unwanted behaviors of outdoor cats are relieved by TNR. As mentioned, colonies that are fully TNR will stabilize and over time, reduce naturally. Neutered male cats will no longer spray to mark territories or get into fights over females. Spayed female cats won't go into heat, so no more 3am howling for a mate. TNR also helps "flatten the curve" during kitten season; while it is impossible to stop every outdoor litter, we can keep it to a more manageable number so that rescues and shelters are not overwhelmed.

ear tips - it's hip to be tipped

Now that you're armed with all this knowledge, how do you take action? The best resource is to actually just Google: "tnr groups near me." That will produce a list of groups with resources to help with your community cats; their ability to help may vary.

We often hear the threat of someone poisoning cat(s). Please be aware that it is illegal in Michigan to abuse, abandon, neglect, or mistreat animals—or to threaten to torture or kill a pet as a way to terrorize or control another person.